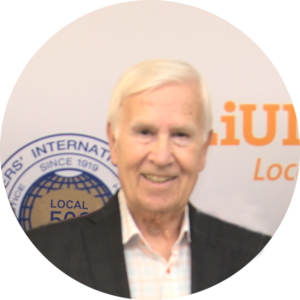 Carmen Principato is the Business Manager for the Labourers’ International Union of North America, Local   506 in Toronto, Ontario.   Carmen was first elected to the position of Business Manager in 1986, a position he has held ever since. As the top elected official of his Local, Carmen represents over 8,000 unionized members in the ICI Sectors, Pre-Cast and Demolition Sectors, as well as members in the Hospitality and Convention Industry. Carmen is currently Vice-President of the LiUNA Ontario Provincial District Council, a body that represents approximately 100,000 unionized construction members across Ontario. He is also Vice-Chair of the Labourers’ Pension Fund of Central and Eastern Canada, representing 80,000 members. As a Trustee of the Local 506 Training Centre, Carmen assists in steering the work of the training facility, which trains over 8,000 people, providing them with the skills to obtain and maintain gainful employment in the Construction Industry. He is a Trustee of many of the Employee Benefit Plans providing his membership and their families with health care and social services. In addition, Carmen is responsible for establishing a Scholarship Fund Program for the members’ children, providing an opportunity for them to attend post-secondary education, and a Retirees Activity Club, of which he is the Co-Director.

Carmen has been bestowed with many honours. In 1992, he received a Commemorative medal from the Governor General of Canada for the 125th Anniversary of the Confederation of Canada in recognition of his contribution to compatriots, community and to Canada. Carmen has proudly had a laneway named after him, ‘Carmen Principato Way’ which is located on the grounds of the Toronto Azzurri Fieldhouse Soccer Academy. Carmen also supports his community by providing financial support to a variety of organizations, in addition to supporting the Ephraim’s Place Community Centre by transforming a deteriorated neighbourhood Recreation Centre into a sparkling new place of pride, play and gathering for the youth. Carmen supports numerous initiatives including the Humber River Hospital; Memorial Hospital in Brampton and The Carmen Principato Scholarship Fund. Carmen was also awarded with a medal in the Comitato Tricolore Per Gli Italiani Nel Mondo, in recognition of his many years of service and dedicated leadership. Through his numerous contributions to life in Canada, Carmen has led by example, and has been an inspiration to Italian Canadians.